Today we remember that the trauma after War is in no way easy to define and, even more, to locate. Neurons in the brain just don’t go around playing games of telephone, like two kids listening to tomato cans on opposite ends of a string. Our sensations (sight, sound, touch), our movements, and our emotions (automatic responses to push us toward or pull us away from something): all these experiences come together in complex ways inside our skulls. And when those skulls get rattled, they get rattled complexly. From Scientific American, today’s it’s “Veterans of Iraq, Afghanistan Show Brain Changes Related to Explosion Exposure.”

A group of researchers associated with the Veterans Administration Hospital (Puget Sound) in Seattle, Washington, USA, asked the question: if we look at the brain scans of service members who have been exposed to blasts such as those caused by improvised explosive devices (IED), will we see differences in how those scans appear when compared to those of similar individuals who have not experienced such blasts?

No surprise, the answer was yes. More of a surprise was the area that located the differences: the cerebellum. 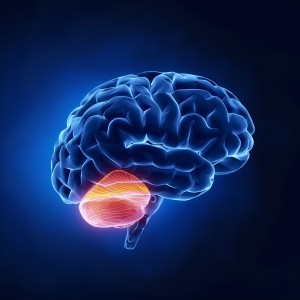 The cerebellum (highlighted above) is a part of the brain that has long been associated with coordination of physical movement. In a way, it’s the home of your “muscle memory.”  Muscle memory, however, is not just about knowing how to pedal a bike after not having been on one for ten years. Many different functions come together in the cerebellum to allow responses to events to be as smooth and as correct as possible.

Even though service members are now, because of advanced protective coverings, far less likely to die from blasts, they are certainly still quite susceptible to the highly-pressurized air from those blasts. By affecting areas like the cerebellum, these blasts, especially when many in number, can pummel the brain enough to cause far-ranging changes.

This is the tip of the iceberg as far as traumatic brain injury (TBI) research. The cerebellum will almost certainly remain an important area of scientific interest, but likely other areas will also get their chances at the microphone. We’ll let the smart folks do what they do best.

What combat vets do best is, in a way, just as important.

Too many times we become fatalistic when we hear the letters “TBI,” as if it were something akin to Ebola infection.  Yes, for any service member who has been exposed to blast injuries, the longstanding effects of TBI must be investigated and documented. Yes, some challenges caused by TBI will not, at least with current medical technology, just disappear.

But that’s what combat vets do best: face challenges. Do what it takes, because they have what it takes. Short-term memory and attention might be affected. Mood shifts might have to be taken into account. But still there are missions and connections worth looking for, striving for, living for.

So you learn to avoid situations that only bring pain. You learn to apply skills in a new way.You don’t give up. That’s not what combat vets do. You didn’t then. You don’t and won’t now.

The investigators published their research in a journal of the American Academy for the Advancement of Science. That’s a big deal, a very big deal. People are taking this work seriously, and combat vets can count on that.

Living with TBI isn’t easy. Neither was coming back from War. That’s why the real healing will always be in the truth: combat vets still have what it takes to do what needs to be done.  We keep going, as we all keep learning, keep trying—and keep living.

Until tomorrow, be well,